You can read all about making Welcome Videos here.

The Video Hive is part of Connected Learning and our primary role is to create educational content for teaching staff. We’re able to assist other VU departments when we have availability.

03) What’s involved with making a video?

03) What’s involved with making a video?

All videos require a degree of planning. While it varies from project to project, most videos will involve three stages:

PRE-PRODUCTION
Pre-production is the initial planning stage. The first step is to get in touch with Video Hive staff to discuss your idea.

From there, we’ll set up an initial meeting to help you develop a brief and any other materials required, such as a script or interview questions.

All videos require a brief. This provides an overview of what you’re after so we can properly plan the shoot. A brief does not need to be lengthy (a paragraph or two) but should provide a clear idea as to what the final product will look like.

The key questions your brief should answer:

Below, you can see examples of project briefs (also on our Resources page):

Once the brief and your script / interview questions have been finalised, we can begin to organise the shoot. Scheduling needs to be undertaken by video production staff to ensure there’s adequate time to shoot as well as set-up and reposition cameras and lighting equipment.

PRODUCTION
Production refers the actual shooting day. Filming may take place either in the Footscray Park studio or on location. Most videos produced at VU involve a half to full day shoot. Note that the final duration of a video is not always a good indicator of how long it will take to film. For example, a 30 second video shot in six locations around Melbourne will take a lot longer to produce than a simple 10 minute interview in the studio.

Prior to the shooting day it’s important that all equipment, uniforms and props have been prepared to avoid any delays. A video really needs to be a “textbook example”, representing the very best practice. For example, if you’re demonstrating a procedure that requires a lab coat and protective gloves, it’s vital that these are worn in the video. It’s much easier to get something right on the day than to try and fix in the edit. Or worse still, having to reshoot a scene due to an earlier oversight.

POST-PRODUCTION
Post-production is where editing takes place and the video comes to life. The raw footage is cut and music and graphics are added. Most VU videos take 1-2 days of editing. Once completed, a private link to the video will be provided for you to review.

Please allow one month from pre-production to delivery. The process can be expedited, but remember at any given time video production staff are handling multiple projects. Allowing adequate time for production benefits all involved.

The below diagram demonstrates the typical lifecycle of a video:

Week One – Pre-production meeting. Preparation of brief.
Week Two – Preparation of script or interview questions. Organisation of shoot such as room bookings and sending calendar invites to participants.
Week Three – Shooting (most shoots at VU are completed in a half or full day).
Week Four – Editing of raw footage, music, logos and graphics added. Delivery and any revisions.

Short and sweet is recommended, ideally under two minutes. We have moved away from filming lengthy presentations and workshops, as analytics show staff and students tend not to engage with longer form content.

Watch So you’re going to be in a video for further information.

08) Do I need written permission from people in the video?

08) Do I need written permission from people in the video?

Anyone appearing in a video will need to sign a consent form. These can be supplied by Video Hive staff on the day. If the video involves filming under 18s, the child will need written consent from parents/carers prior to shooting.

It’s possible to blur people’s faces in post-production but the preference is for all participants to provide consent.

When filming an event such as a guest speaker, it’s vital they’re made aware the presentation is being recorded and they’ve given prior consent.

Consent forms can be downloaded from our Resources page - either as a single form or a multi form for groups. Video Hive staff can also supply forms on the day.

09) I want to use a commercial song or clip from a movie in my video. Is this ok?

09) I want to use a commercial song or clip from a movie in my video. Is this ok?

Intellectual property is a complex area of the law and we recommend avoiding copyrighted material in videos. We have access to a large range of good quality videos, images and production music that can be used without any issues.

It may be possible to use copyrighted material depending on your requirements. For further information, please contact:

Ingrid Unger
Victoria University Copyright Officer
This email address is being protected from spambots. You need JavaScript enabled to view it.
(03) 9919 5958

10) Do you only film at Footscray Park or at other campuses as well?

10) Do you only film at Footscray Park or at other campuses as well?

We can film your project in the Video Hive studio at Footscray Park or any other Victoria University Campus. VU offers a variety of locations suitable for filming - modern office spaces, classrooms, bushland, workshops and laboratories. We can also film at specific locations outside of VU on request (Note this may involve permission from council and/or the land owner).

11) Are students able to use the Video Hive?

11) Are students able to use the Video Hive?

The Video Hive is for the exclusive use of VU staff. Students are welcome to be involved with videos produced by staff, but it is not to be used for course work or assignments. 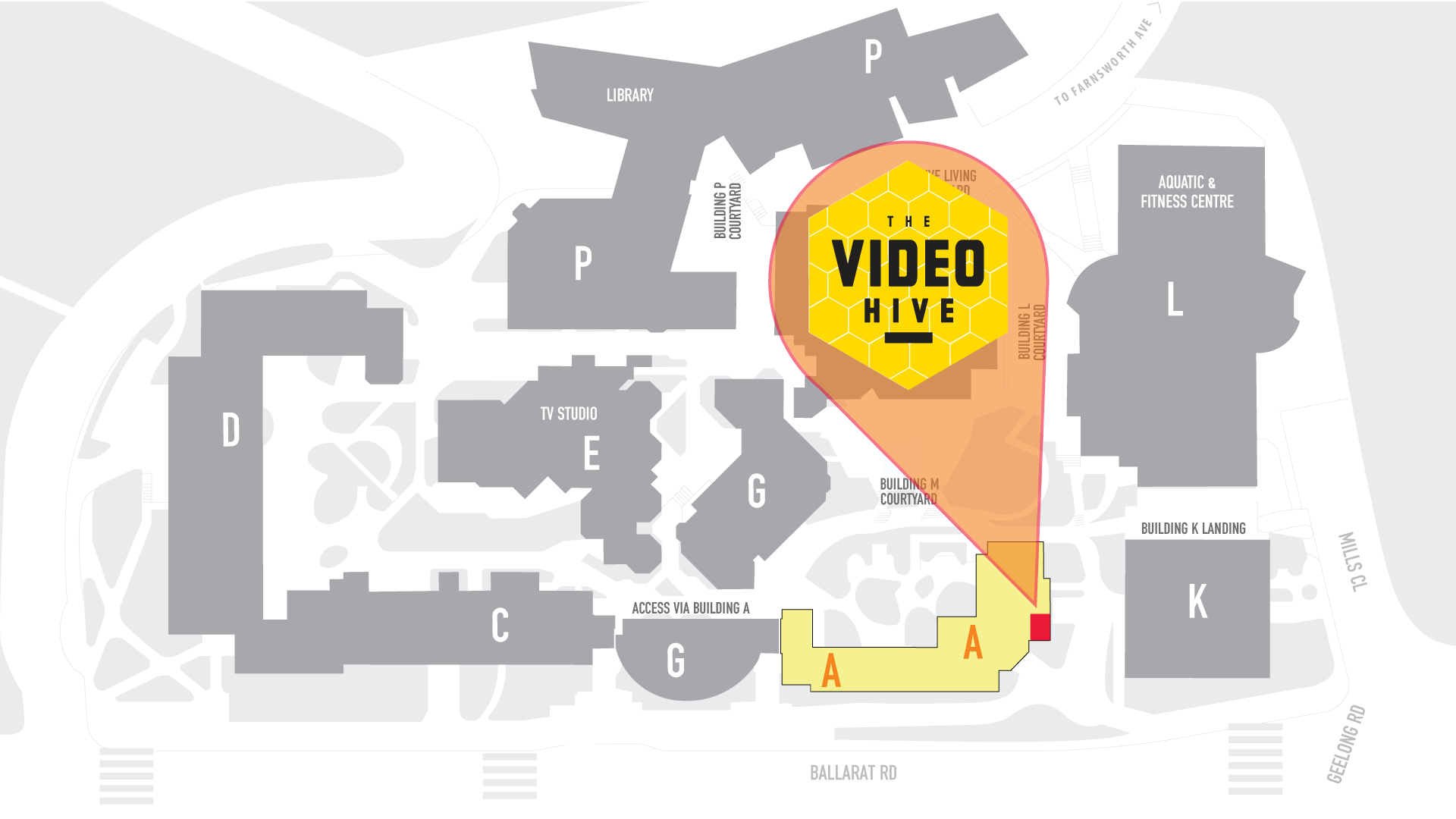 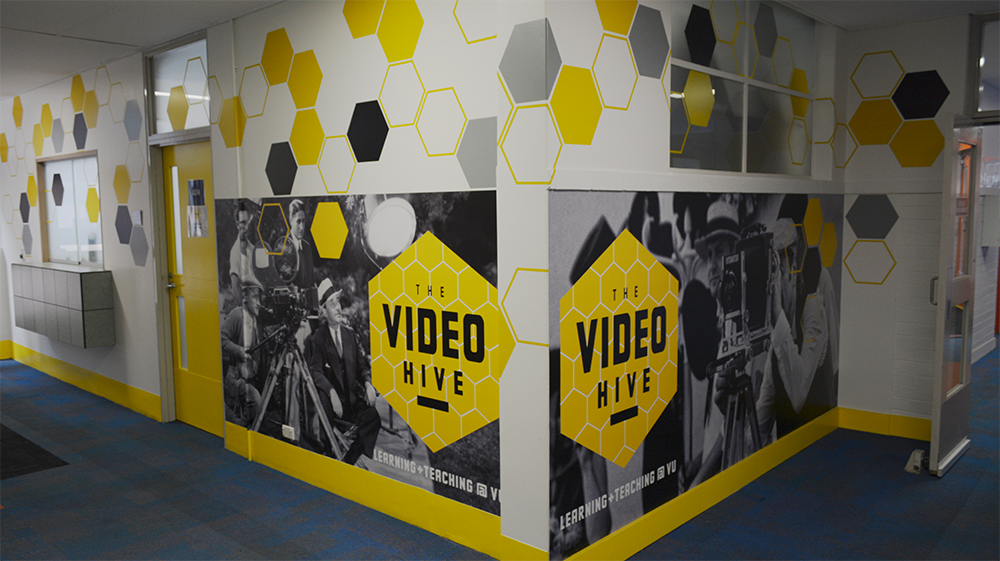 We are located in A314 at the Footscray Park campus near the walkway joining A and K building. (Not to be confused with “The Hive” downstairs or the student TV studio in E building)

13) What costs are involved?

13) What costs are involved?

Any expenses such as cabcharges, parking fees, props or materials must be met by the department requesting the video.

The Video Hive is staffed by:

Stuart Clegg – Senior Video Producer
Stuart manages the Video Hive and is focused on all aspects of video production.
This email address is being protected from spambots. You need JavaScript enabled to view it.
Ext 4924

Igor Asmaryan – Multimedia Designer
Igor’s focus is on virtual reality, 360 camera and multimedia video production.
This email address is being protected from spambots. You need JavaScript enabled to view it.
Ext 5087

15) What are your hours of operation?

15) What are your hours of operation?

The Video Hive is staffed Monday to Friday from 8:00am until 4:00pm.

Occasionally the Video Hive is unattended due to location shoots, however we make sure someone is available to assist when a studio booking is made.

Your submission is being processed. This may take a little time. Thank you for your patience.

Stuart Clegg
Senior Video Producer
This email address is being protected from spambots. You need JavaScript enabled to view it.
Ext 4924

Igor Asmaryan
Multimedia Designer
This email address is being protected from spambots. You need JavaScript enabled to view it.
Ext 5087